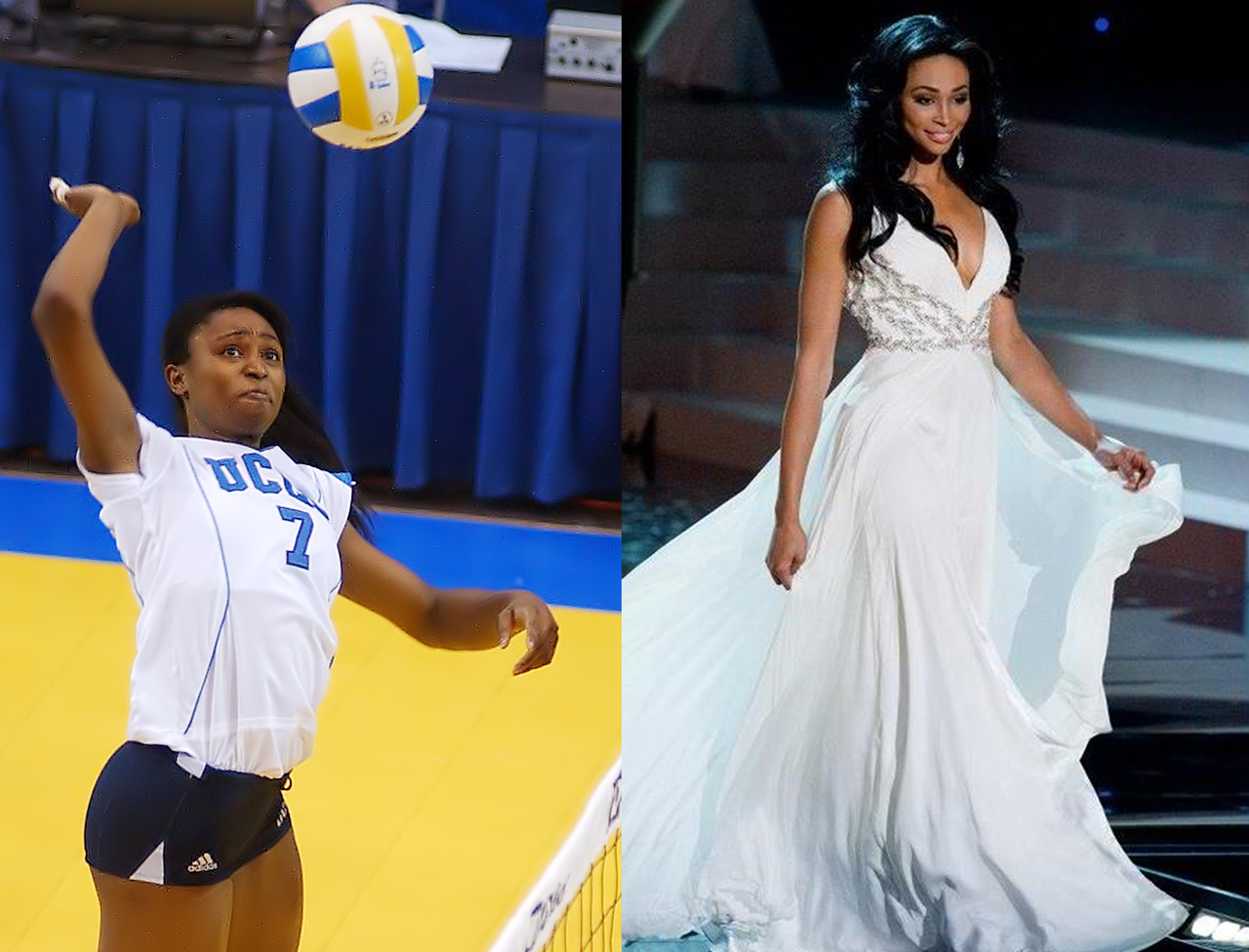 When Nana Meriwether transferred to the UCLA volleyball team as a sophomore, she was a shy girl with “goofy” footwork, the sort of player then-head coach Andy Banachowski called “a little (OK, a lot) bashful.”

Neither Banachowski nor any of Meriwether’s new teammates would have expected that, eight years later, the lanky middle blocker would be standing on stage, accepting the second-place crown in the Miss USA pageant.

“At first there were a lot of questions, like “˜Why would I lower myself to that?'” she said.

“But doing pageants has definitely been the way I gained the most confidence in my life. I stood in front of 10 million people (at Miss USA) ““ there’s no way to do that without knowing who you are.”

Meriwether’s development into a successful, competitive woman began several years before, during her time at UCLA.

She began playing at UCLA in 2004, a promising addition who was at first very athletic but not particularly skilled at volleyball, Banachowski said.

“Nana really blossomed during her time here,” he said. “She had to make some corrections to her footwork, which is extremely difficult for an athlete. But she’s quick and she can jump ““ she became a premier middle blocker.”

By her senior year, Nana was considered a team leader, both in personality and in stats. En route to leading her team to a Final Four appearance that season, she became the first-ever Division I player to lead the country in both hitting percentage and blocks. But equally memorable to her coach was her increasingly expressive style of play.

“By her senior year, she really became an emotional leader on the team,” Banachowski said. “She got really comfortable out here ““ after a great play, she’d run around the court and slide on her knees.”

After graduating with a degree in political science, she found herself competing professionally in Puerto Rico and training in Colorado Springs in hopes of competing at the 2008 Olympics.

But eventually, her longtime desire to become a doctor called her back to California, where she took classes at USC to prepare for medical school.

It was then that her life took a somewhat unexpected turn.

During her time at USC, Meriwether found she missed competition and decided to follow a friend’s suggestion to enter the popular Miss Malibu pageant. Meriwether had been exploring modeling, but her friend suggested that pageants would make better use of her poise and intelligence.

Her first time in the pageant, she won first place.

Meriwether soon realized that pageants offered her far more than the chance to compete. They offered her the ability to gain support for her lifelong passion: The Meriwether Foundation, a nonprofit she founded to develop orphanages, schools and clinics in southern Africa.

Inspired by the eight years her parents spent doing humanitarian work in the area, she serves as both director and chairwoman of the foundation and spends months in Southern Africa to contribute to the organization’s projects firsthand.

Ultimately, it was this commitment to nonprofit work that helped her former teammates and coaches understand why she continued to compete.

“(Seeing Meriwether in pageants) really opened my eyes to her talents and her willingness to put herself out there,” Banachowski said. “She’s willing to make those sacrifices and give up her private life ““ she’s doing all these things so she can help her foundation.”

And as she continued to compete, she began to challenge the not-so-flattering image of the typical pageant competitor ““ a stereotype which even her supporters admit exists.

“I think it’s unusual for an athlete to follow this path,” Banachowski said. “But (she) will change the perception now. A lot of times, pageant contestants may be viewed as less than intelligent, and that’s certainly not true with these women and the way they can handle themselves and conduct themselves.”

But while many questioned Meriwether for her transition from sports to pageants, she says the two are very much alike.

“A lot of my athletic friends asked why I was doing pageants and my pageant friends didn’t understand that I was an athlete,” she said. “They’re very similar with discipline and preparation. Going into a pageant is the same as training for a big game.”

Just as in her volleyball career, Meriwether quickly found her way to the top. After competing for Miss California for four years and scoring as high as second place, she returned home to Maryland where she competed for and won the state title.

And when Meriwether departed for Las Vegas to compete for the national title, she brought along some of her longest-standing supporters: her fellow Bruin athletes.

One of those athletes, former basketball player Julia Pitts, laughed as she described feeling “like a proud mother” as she watched Meriwether train for the competition.

“It was just so much preparation, day in and day out, having to look the part for 10 hours a day,” Pitts said. “It was the proudest moment for me being there ““ I still get a little teary-eyed.”

And as the contestants were whittled down to the final two, with Miss Rhode Island Olivia Culpo taking the crown over Meriwether, Pitts felt a familiar pang of loss.

“As athletes, we know that disappointment,” she said. “Coming so far and then losing ““ that’s like losing a national championship.”

But Pitts says she and Meriwether agree that the second-place finish has a silver lining.

“Being number two is the ultimate winner,” Pitts said. “She got national footage, but now she has her life back. What she does next is completely up to her.”

And while those future plans will likely involve medical school at another one of the nation’s universities, Meriwether is insistent that her loyalties will always remain in Westwood.

“Obviously, my heart lies with UCLA,” she said. “I gave my blood, sweat and tears to UCLA playing volleyball. I will be a Bruin forever.”